It is usually a complicated affair getting tar off your car. The old-fashioned thorough scrub would only leave unwanted scratches on your car. This is the reason why one should ensure they have the best tar remover for car paint at hand.

Have you ever had tar stick on your car paint? Tar can be an unwanted nuisance on your car. The fact that ordinary soap and water cannot remove them without some damage to the car merely frustrates one’s efforts.

Why Use Tar Remover?

If you have ever had tar stick on your car then you know that any amount of scrubbing wouldn’t get it off. At least not without some damage to your car’s paint. Tar can only be removed with the help of tar removers the best of which we are going to discuss here.

Tar removers would carefully remove the stuck tar while ensuring the paint on your car remains intact. The remover works by dissolving the tar on your car enabling you to wipe it away with little effort.

There are various tar removers that would do a good job of getting rid of tar stains on your car.

Chemical guys bug and tar remover tops in our list of the 7 best tar removers for car paint. It is a heavy-duty cleaner that can get rid of tar and bugs off any vehicles surface. The formula gets rid of the most resistant of stains from tar and bugs while preserving it from irreparable damage.

The special formula has been proven to be safe on windshields, bumpers and other painted surfaces since it doesn’t have any corrosive effect. Its versatility is such that it can be used against tar, grease, dried bugs, asphalt and road films.

It is also safe when used on a single coat and clear coat paint finishes. It removes bugs and tar while upholding the integrity of the painting work. Its reduced scrubbing time minimizes the chances of undesirable scratches being left on the car or painted surface.

It, however, has some difficulty removing tar that has been present for longer periods of time.

Equipped with Micro active technology, Stoner Car care formula has amazing ability to remove tar and bugs off the surface of your car. It has the ability to get rid of sticky material off chrome with no damage or dulling effect whatsoever.

It is also allowed to pour it on the affected area and let it set before gently scrubbing off the tar. It is effective against tar, baked-on grease and also asphalt. It’s a good remover of road film and is also safer for clear coats.

The Micro active solution dissolves the bugs and tar for faster removal while being gentle on surfaces. It doesn’t come with any harsh chemicals that would have a corrosive effect on sensitive surfaces. It

This yet another great remover of tar off car surfaces. It acts fast to dissolve all tar, glue and even oil stains. What’s more, one can also use it to remove pen ink that might spill onto car chairs.

It is not as strong and intense as its predecessors which would make a case for it being less harsh. The harsh chemicals typical of other tar removers wouldn’t be a problem here.

Its use is not only limited to clearing tar stains off cars but also on carpets rubber and upholstery. It is however only effective against mild contaminations failing to get rid of resistant tar stains. Aside from this drawback, it is quite a pocket-friendly alternative.

Citrol is an astounding remover of tar. It dissolves tar with impressive speed leaving little need for cleaning up after use. Other tar removers would require numerous applications before they can finally start dissolving the tar.

It is perfectly safe on clear coats thus you don’t need to be afraid damage on your car’s exterior. It can also be used to get rid of grease with amazing ease.

It, however, is a harsh product so it wouldn’t be advisable to apply it and let it sit as with other removers. Care should also be taken to avoid predisposition to cancer and other genetic defects. Seems like its razor-sharp efficacy has a tradeoff after all!

It would thus be advisable to wear a mask and gloves whenever you want to use it to limit potential exposure.

Despite its relative affordability, Turtle Wax has an amazing ability to rid tar, bugs and tree sap from automotive surfaces. It strongly adheres to the stains on vertical surfaces which hold it in places as the stain disintegrates.

After spraying the affected area all you need to do is wipe off the mixture of dirt and remover. Therefore, one doesn’t have to scrub the tar off as we have seen with other removers.

On completion of cleaning the remover leaves a protective layer on the cleaned surface so that future bug and tar stains wouldn’t be as hard to get rid of.

Its only drawback would appear to be it’s being highly flammable.

Meguiar’s tar and bug remover goes hard on tar and bugs but is gentle on paint ad all car exterior surfaces. It uses a powerful foaming action to get rid of tar and bugs by loosening their grip on the surface.

Its specialized extreme foam action rehydrates bugs while making tar soft for easier removal. Can be used between washes or before. It works better when left to sit for about five minutes before wiping off the tar. This disintegrates and softens the tar or bugs.

One should ensure to work in an area that is well ventilated to reduce the risk of accidentally inhaling the spray. When spraying on the affected surface make sure the remover doesn’t dry. You can always reapply if this happens.

After spraying and letting it sit for the aforementioned timing, the area can simply be wiped then rinsed with water then allowed to dry. 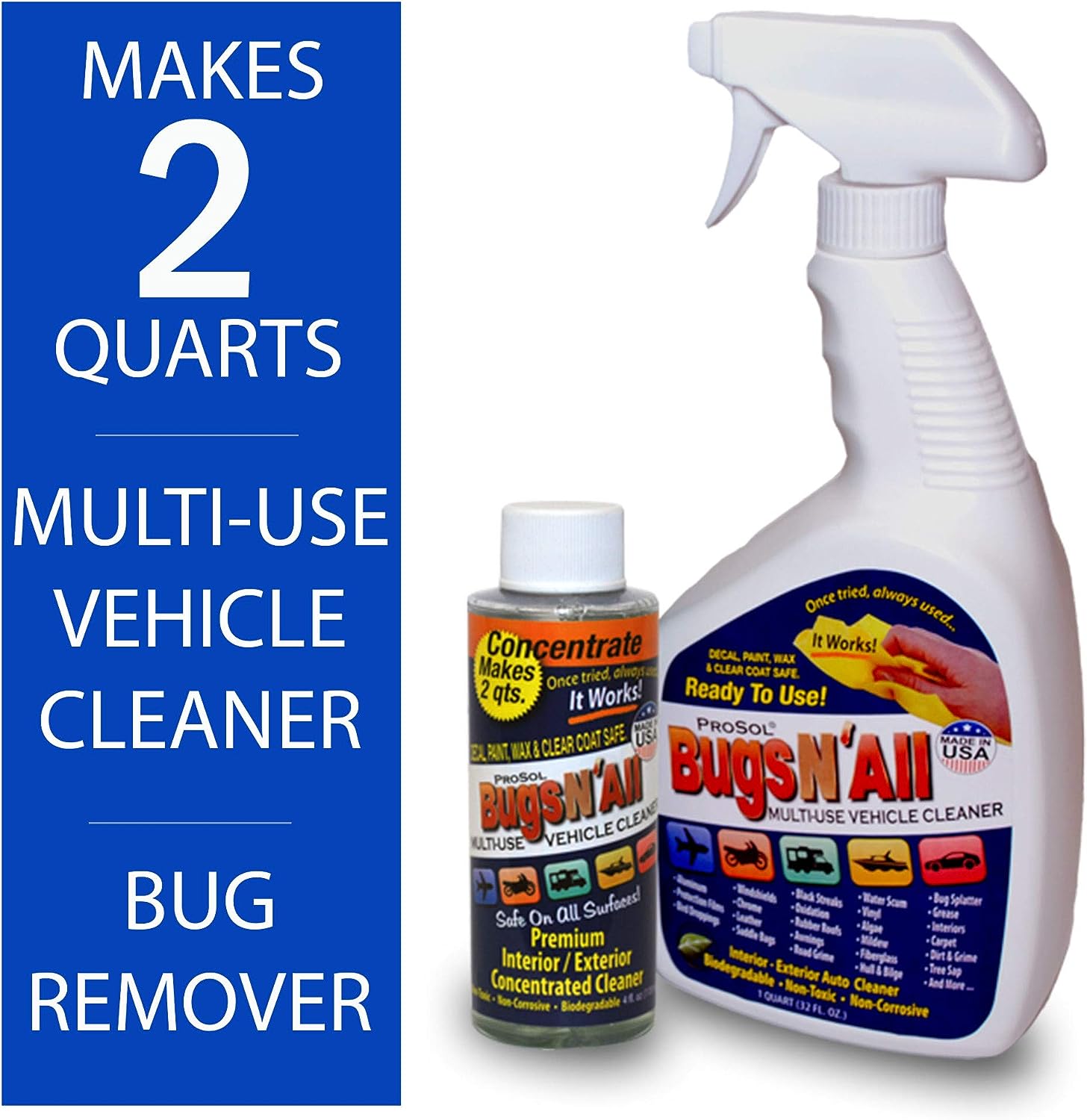 Closing our list of the top 7 best tar remover for car paint is the Prosol Bugs and All tar remover. Let no the fact that it comes at the end of our list make you deem it less efficient than the aforementioned ones.

Prosol bugs and all tar remover makes use of smart technology to efficiently clean organic materials. It neutralizes and dissolves the acids contained in either tar or bugs in a matter of seconds.

It’s a tough cleaner or tar and bugs and goes easy on the car’s surface. It doesn’t have any corrosive effect since no harsh chemicals are included in its manufacture. Add that to the fact that it is mostly odorless and you have yourself a powerful and versatile remover of nearly all kinds of dirt and grime.

All you have to do is apply the area with the tar then let it sit for about 30 seconds. After this, you should notice that the bugs or tar should have become mush like and easier for you to simply wash away. Talk of working smart!

They say money talks, right? Especially in this pandemic enforced crisis. The first thing you’d have to consider before buying anything would be the money at your disposal. Why should buying tar remover be any different then?

It is prudent one knows the type of chemical the remover may or may not contain. This is so as to know whether the remover would be harsh on their car.

One should consider how versatile a tar remover is. A product that can be used to clean a variety of things would be a welcome addition in any home

No matter what tar remover you go for, it all boils down to how efficient it can be. No one would want to waste their money on an inefficient tar remover.

Read Also: How to Get Rid of Ants in Car

Q: How can I get dried tar off my car?

A: With the help of a suitable and efficient tar remover tar shouldn’t be a problem getting rid of.

Q: What is the recommended tar remover for cars?

A: We have discussed the 7 best to help you answer this question easily.

Q: Can tar remover damage the paint on my car?

A: Yes. It would all depend on how you use it though. Some tar removers tend to be corrosive and shouldn’t be let to sit for long

We hope our review of the 7 best tar removers helps you make a good decision on which tar remover to acquire. It all comes down to what you, the buyers want.